The current version is working in that you can type (in yellow) 42 10 * . and it will print out 420, define basic words and so on. However, a few things are missing, no title text, if you make a mistake it dies completely, and it doesn't reset compilation stuff if you don't compile a red word.

L8R: Also seems to work fine on the latest Zesarux (a beta 7.1). This is fiddlier to get going, copy the zrun.bat file, and the boot.img and bootloader.sna files into the zesarux directory , change to it, and run zrun.bat and it should start without the setup the zesarux defaults to.

Editor up and running

Virtually all the code I wrote before worked straight off ; the main thing was changing the dictionary selector word from mwords to words.

So the new version is now useable. It can be downloaded from here https://github.com/paulscottrobson/mnext/tree/master/release

It runs on cspect.exe (it might run on Zesarux, I just haven't tried it yet !) ; to make it run start the emulator with the -zxnext and load the .sna file in using F2. It should briefly display booting (at this point it is compiling the bootstrap code) and then display an editable area.

You can run it with the SNA file as a parameter to cspect.exe but if you do this boot.img has to be in the same directory.

I also did some speed testing of the cross page calling mechanism. I put two nested loops, one of 64 and one of 50000, so about 3.2 million in total and ran it first calling a routine on the same page, and then calling it on a different page ; all the code was fudged into the page area $C000-$FFFF and to different pages.

So without page switching it took 19s ; with it, it took 1'03s ; which I'm quite pleased with, I though it it would be much much slower.

This is running at 14Mhz, of course.
Posted by Paul Robson at 09:58 No comments:

I've actually rewritten it all, again. I like the bootstrapping version, but not the way it's implemented. So I've rewritten the kernel (a few core functions and the compiler) but for the Next not the Spectrum ; it now won't run on a Spectrum, except maybe a Spectrum 128.

This gives vastly more space to work with. I'm using 16k paging, largely with the 128 in mind, so it pages 16k chunks in and out at $C000-$FFFF. Two 16k pages are dedicated to the now physically seperate dictionaries, and cross page calling is now working.

This is okay, except that it's much slower, because it has to switch pages then switch to the routine and then switch back again. It's best really to write in modules that perform specific tasks - which is what you do anyway, rather than having monolithic code bases and relying on the compiler (which figures out when it does CALL and when it page swaps).

But you should do this anyway.

Otherwise it's the same, except the C register is now IX not BC (I wanted BC for the cross page calling mechanism), so the code tried to date just pings into place. It's actually pretty easy to bootstrap this system, even by FORTH standards.

Not quite done, not coded 'variable' yet (it would be possible to do this in M and it would work fine but its cleaner just to code it seperately) and a few other bits and pieces, but then the other modules I wrote should just ping into place. Hopefully :)

It now has a seperate home at https://github.com/paulscottrobson/mnext
Posted by Paul Robson at 00:23 No comments: 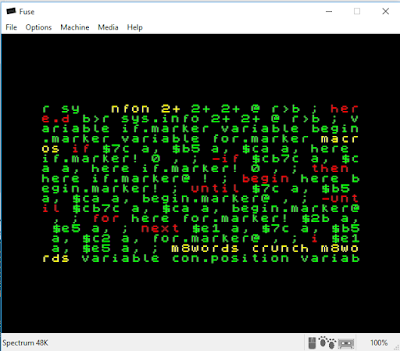 I've written the editor now, which means that something can be downloaded that actually works, rather than just displays things.

I've only tried it on Fuse and CSpect emulators, but it should run on anything.

So, you want this file https://github.com/paulscottrobson/m8/blob/master/system/test.sna which is the test.sna file in the master system directory in the github.

If you download this file which is a standard 48k Spectrum SNA file and run it it should display a screen of what looks like random data but is actually part of the boot code for the system (with all the comments removed !). It will flash for a few seconds a bit like the tape loading but more erratically (this is compiling the boot code) and the the screen will clear and display something like this, which is part of the boot code dumped into the edit buffer so there's something to edit.

(You don't have to do this boot compile every time, you can just save it as a .SNA file)

Shift and keys 1-4 recolours words (sadly not the colours shown on the Speccy Keyboard ....) , 5 6 7 8 move the cursor about, 0 backspaces, the shift keys roughly do the same thing (I use 6 bit ASCII with lower case text, so you can't do capitals), Enter does a CR, and shift and Enter exits (it displays the debug information on the bottom line).

It's useable at 3.5Mhz though the screen displaying is a little bit sluggish, not unsurprisingly, but it works fine. In a Next, running at 7 or 14 Mhz, it's much zippier.

To get a working system there isn't that much left to actually do, though there is plenty of stuff to add.
Posted by Paul Robson at 06:55 No comments:

The current M8 has nearly caught up with the old version of M8. It's acquired structures, the code on the right is for for ... i .... next. Like ColorForth you can't nest them, so break up your code :)

Most of the standard vocabulary is there now (all ?) so I can compile some of the libraries I wrote previously, the Console I/O and memory dumper ran straight off.

By FORTH standards it's quite rapid ; for example for 10000 for next it compiles the following (you can probably see the pattern in the for and next words defined in the picture). It keeps the loop value on the top of the stack and also puts it in A at the start of every loop (this is an optimisation that became a language feature, fun when you write your own language ....)

which isn't amazingly efficient by pure Z80 stanrds, but isn't bad. As far as I can see once you get used to the slight oddities, it's much quicker than writing Z80 assembler and it's quicker than Z80 FORTHs, even the multitasking one which works in Z80 code.

So next up, the editor. It would probably port straight off, but I've decided to rewrite it. The major change to the language involves the use of register known as 'C' (actually Z80 BC register) (A is HL and B is DE), which is used as a temporary register, which should hopefully cut a lot of the pushing and pulling of stack values the original had.

Once the editor is working it's a short step to it working interactively.

The variables thing is quite like Color FORTHs but takes it a stage further ; declaring variable FRED creates three words FRED& (get address) FRED@ (get value) FRED! (store) which cuts out a lot of stack work and the work is handled by the compiler. I really wanted this because I thought limiting the 'stack' - e.g. workspace to 2 (now 3) registers would mean an explosion of variables. The odd thing is it hasn't ; you could make a pretty good case that the variables actually are cleaner code that faffing around trying to remember what is where on FORTHs stack, do I do OVER ROT or something, which always annoyed me.

Well , it is. Partly because I have been away for a few days, mind.

Anyway, while I was away I decided to redesign the whole thing backwards to fit a more ColorForth style design. So what I have now is a 'kernel' Spectrum .SNA file, which contains the (simple) compiler and a bit of support stuff.

So the way it works now ; the boot code, which is written in a textified Color Forth, is converted to the 8 bit characters I use - 6 bit ASCII plus 2 colour bits, and stored in the screen space. The compiler then compiles it or executes it from there (at the same time outputting the source in ColorForth format).

This is very much like Chuck Moore's ColorForth source, in style ; except rather than use constants I've bodged a five minute assembler into it. The two pictures are roughly the same bit of code - I couldn't find a decent colouring editor.

While I was away I was having difficulty sleeping, so I read the Spectrum Next's technical documents to try to get some shut-eye. This worked quite well, but not before I noticed that in the Low-Resolution (128x96x256 colours) mode the Next uses memory from 6000-7FFF as well as the usual screen RAM area. So additionally I've made it a bit more flexible in that it can be build anywhere.

I plan to page the top 16k ala Spectrum 128 to extend memory, but the 16k between there has to host the dictionary and common code ; otherwise it will go mad with task switching.

I'm also back on Arch Linux, fortunately for my sanity.
Posted by Paul Robson at 12:36 No comments:

Didn't do a lot yesterday. Decided to make that change to (effectively) lose the requirement for the coded swap - so you can now code 4 1 + rather than 4 , 1 + and changed most of the code.

Also completed the editor and the debug loader (this bit of code loads coloured text in easily for debugging purposes).

I wrote some code to parse out words and search the dictionary for them. In the end I decided to write it in Z80 assembler. Not because the benefits of M8 coding aren't there ; it's definitely simpler, but I wanted things to go as fast as possible on the "interactive recompile".